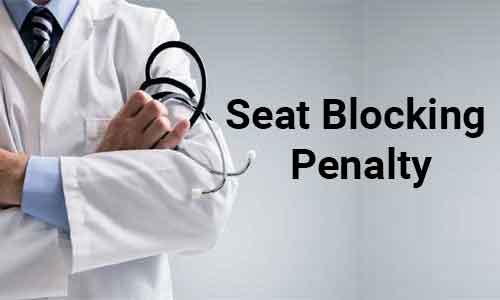 Seat-blocking is a term attributed to the trend of opting for a seat during the counseling process but dropping out at the last moment. by doing so it prevents admission opportunities to deserving candidates in good colleges. some private colleges collude with top-ranked students, seats are then sold to low ranked students for huge donations after the former student surrender it.

Earlier in 2019 October, the same issue has come out in income tax raid on medical colleges run by two prominent party politicians in Karnataka. according to the IT report, more than 60% of seats are filled through management quota and the scam ranged up to looting 300 crores.

The Rajiv Gandhi University of Health Science Submitted a report to the education department, stating that the provisions made by the government have been misused by some of the college and candidates, leading to seat blocking scams. it further made a statement that the students must be discouraged from seat surrendering and increasing penalty up to 25rupees lakh instead of a currently existing fine of 5 lakhs rupees.

In response to this, the Deputy Cheif Minister of Karnataka and minister for medical education, Dr. CN Ashwath  Narayan said the government is planning to bring the new rule that no seat can be surrendered by students after mop-up round, very soon the report for the same will be placed before the cabinet.

At Galaxy Education, we help you through the process of finding and applying to the right College in Bangalore. Contact us in below details to get more information on admission procedure and how to secure your seat in these colleges:

Subscribe our newsletter to get the best stories into your inbox!

Please wait, we are submitting your enquiry...